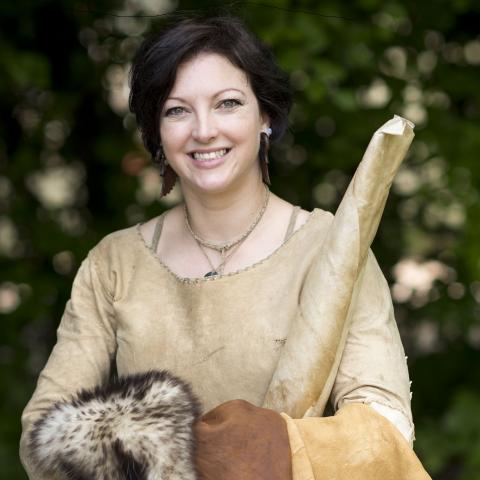 Theresa is an avid practitioner of traditional living skills and primitive technology of all kinds, and has followed this interest into the academic field of Experimental Archaeology, in which she holds a Master’s degree from the University of Exeter. She has recently graduated with a PhD from the same institution, on the microscopic analysis of prehistoric tanning technologies.

Theresa has been tanning skins using traditional technologies for over twenty years. Coming originally from the state of Wyoming in the United States, she was lucky enough to grow up as part of a family of outdoor enthusiasts. This enthusiasm extended to hunting, fishing and trapping in the vast tracks of wilderness surrounding her home town.
Learning to tan was a natural offshoot of the attempt to use as much of the animal as possible, and had the added bonus of producing a beautiful end product. Through much trial and error and with the support of very tolerant parents, she learned to brain tan skins between the age of 12 and 13. Later interaction with other traditional tanners and excellent written information vastly improved the efficiency and quality of her tanning process and end product.

Theresa has taught various tannage types such as fat tan, vegetable tan, alum taw and rawhide production to groups ranging from avid bush crafters to University students for the past five years, drawing on her extensive personal experience to provide a broad understanding of the tanning process. She includes in her instruction a diverse range of information, from skin morphology to helpful hints in dealing with the numerous and frustrating problems which are often encountered when first learning to tan (and often long after!).